is part of the Informa Markets Division of Informa PLC

This site is operated by a business or businesses owned by Informa PLC and all copyright resides with them. Informa PLC's registered office is 5 Howick Place, London SW1P 1WG. Registered in England and Wales. Number 8860726.

U.S. Medical Devices: Imports and Exports, the Role of Tariffs and of the FDA

"The medical device market in the United States is projected to register a CAGR of 4.6% from 2018-2023, with a value of $106.9 billion by 2023, despite an economic slowdown in 2019, as a result of higher tariffs, heightened trade tensions and tightening credit conditions." - Fitch Solutions, 2019

With the United States leading the world as the largest medical device market, there is increasing interest to partner with its manufacturers to expand distribution of medical devices and equipment into Latin America.

Conversely, Latin American manufacturers are looking to establish partnerships with U.S. distributors as a way to expand their presense outside of LATAM. However, many requirements need to be met in order to make these ventures a success. 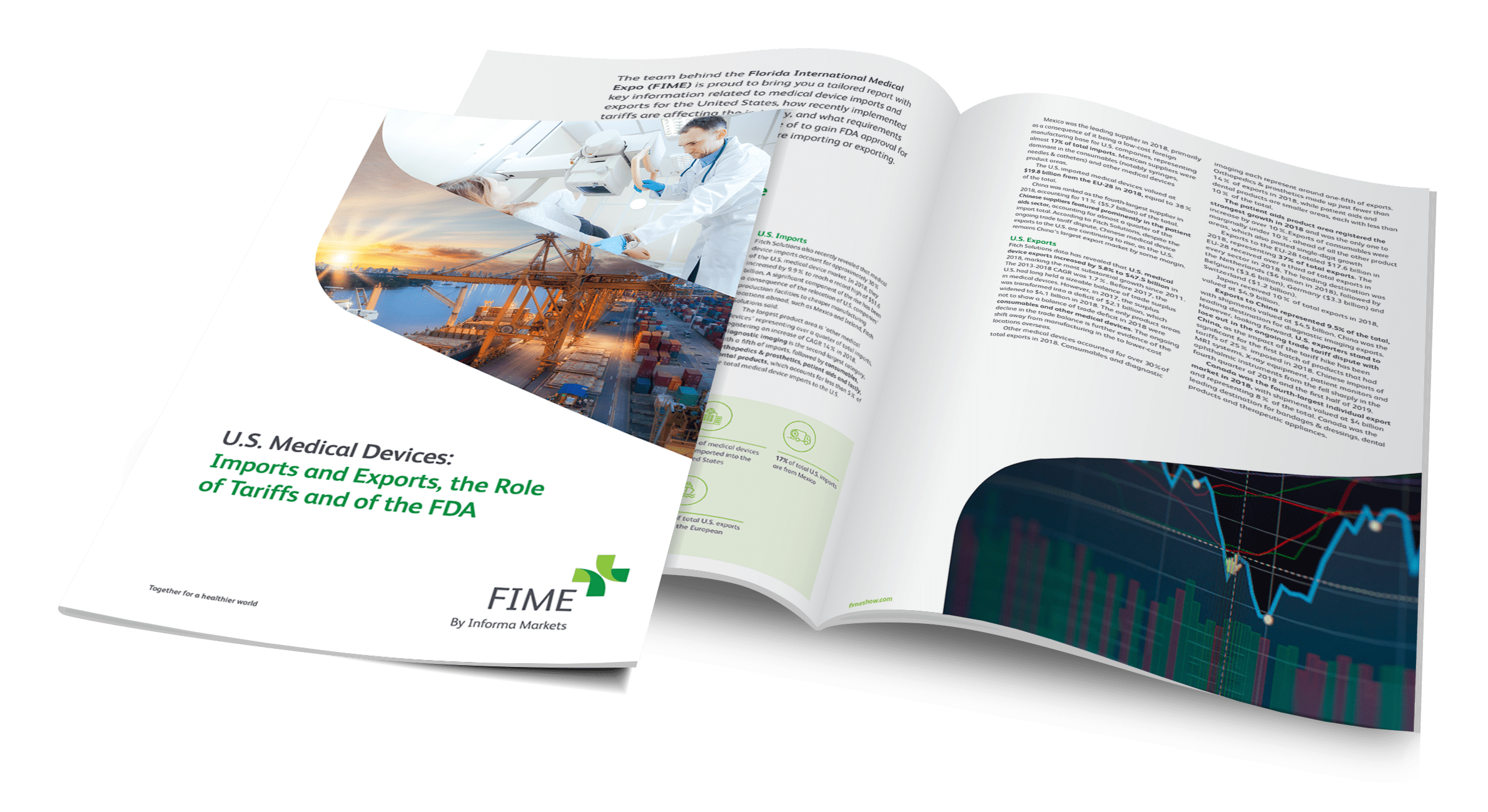 We are pleased to bring you a tailored report with key information related to medical device imports and exports for the United States, how recently implemented tariffs are affecting the industry, and what requirements manufacturers should be aware of to gain FDA approval for its devices and equipment before importing or exporting.

Fitch Solutions also recently revealed that medicaldevice imports account for approximately 30%of the U.S. medical device market. In 2018, theyincreased by 9.9% to reach a record high of $51.6billion. A significant component of the rise has beena consequence of the relocation of U.S. companies’production facilities to cheaper manufacturinglocations abroad, such as Mexico and Ireland, FitchSolutions said.The largest product area is ‘other medicaldevices’ representing over a quarter of total imports,registering an increase of CAGR 14% in 2018.Diagnostic imaging is the second-largest category,with a fifth of imports, followed by consumables,orthopedics & prosthetics, patient aids and lastly,dental products, which accounts for less than 5% ofthe total medical device imports to the U.S.

US Exports
Fitch Solutions data has revealed that U.S. medical device exports increased by 5.8% to $47.5 billion in 2018, marking the most substantial growth since 2011. The 2013-2018 CAGR was 1.7%. Before 2017, the U.S. had long held a sizeable balance of trade surplus in medical devices. However, in 2017, the surplus was transformed into a deficit of $2.1 billion, which widened to $4.1 billion in 2018. The only product areas not to show a balance of trade deficit in 2018 were consumables and other medical devices. The ongoing decline in the trade balance is further evidence of the shift away from manufacturing in the to lower-cost locations overseas.

Other medical devices accounted for over 30%of total exports in 2018. Consumables and diagnostic
imaging each represent around one-fifth of exports. Orthopedics & prosthetics made up just fewer than
14% of exports in 2018, while patient aids and dental products are smaller areas, each with less than 10% of the total.

The patient aids product area registered the strongest growth in 2018 and was the only one to increase by over 10%. Exports of consumables were marginally under 10%, ahead of all the other product areas, which also posted single-digit growth.

Exports to China represented 9.5% of the total, with shipments valued at $4.5 billion. China was the leading destination for diagnostic imaging exports. However, looking forward, U.S. exporters stand to lose out in the ongoing trade tariff dispute with China, as the impact of the tariff hike has been significant for the first batch of products that had tariffs of 25% imposed in 2018. Chinese imports of MRI systems, X-ray equipment, patient monitors and ophthalmic instruments from the fell sharply in the fourth quarter of 2018 and the first half of 2019.

Canada was the fourth-largest individual export market in 2018, with shipments valued at $4 billion and representing 8% of the total. Canada was the leading destination for bandages & dressings, dental products and therapeutic appliances.

The impact of tariffs: under closer inspection
The U.S.-China trade war On July 6, 2019, the United States levied tariffs on $34 billion worth of Chinese goods including a slew of medical devices, with China immediately retaliating kicking off duties of equal size for U.S. goods. A new round of tariffs on $112 billion worth of U.S. imports from China took effect September 1, 2019, and China announced its own round of tariffs on U.S. made goods would also take effect on the same date. The September tariffs imposed by the U.S. were initially set at 10%, and they were later increased to 15% by the United States Trade Representative (USTR). Currently, talks are ongoing to look at ending a 15-month trade battle between the world’s two largest economies.

The Chinese medical devices on the original list of products affected by the U.S. tariffs included pacemakers, X-ray generators, anesthetic devices and optical instruments. However, on July 9, nine types of medical devices were exempted from the 25% tariffs imposed on Chinese goods, including surgical, radiotherapy and dental devices. While the U.S. list of items subject to tariffs contains just a few healthcare products (e.g., surgical drapes and medical gloves), it does include raw materials such as several forms of aluminum, iron, stainless steel, and others, raising the question as to
the impact on medical device manufacturing.

Although U.S. medical device exports are increasing globally, U.S. exporters stand to lose out in the ongoing trade tariff dispute with China, as exports to China fall while imports from China rise. Lower wages in China mean it can produce goods such as medical devices in a less costly way than in the U.S. Tariffs on Chinese goods, which will be paid by the importers upon entry to U.S. customs, mean that the prices of those goods increase at the consumer side to cover the cost.

List of medical devices not subject to the tariffs:

So, who then stands to benefit from the U.S.-Chinese tariffs?

Other trade winners from the measures include Mexico ($3.5 billion), the European Union ($2.7 billion) and Vietnam ($2.6 billion) and the positive effects for them “have increased over time”, UNCTAD said. Korea, Canada and India also benefited, with “substantial” gains ranging from $0.9 billion to $1.5 billion. Other South East Asian countries scooped up the remainder of the tariff-induced casualties, UNCTAD said, while noting that African countries saw only “minimal” benefits.

All eyes on Mexico

The imposition of tariffs on Mexican imports to the U.S. had the potential to cause disruption in the medical device sector, which relies on Mexico for 17% of its imports. However, according to RBC Capital Markets analyst Brandon Henry, the impact could be moderate, but that some companies could be disproportionately affected, such as a medical-device manufacturer that makes a large proportion of its instruments in Mexico.

The FDA’s role in medical device import and export regulation

The Food and Drug Administration (FDA) regulates the sale of medical device products (including diagnostic tests) in the U.S. and monitors the safety of all regulated medical products. Before a medical device can be legally sold in the United States, the person or company that wants to sell the device must seek approval from the FDA. To gain approval, they must present evidence that the device is reasonably safe and effective for a particular use.

Foreign manufacturers must meet applicable U.S. regulations in order to import a device into the U.S., including:

All medical devices imported into the U.S. must meet the regulatory requirements of both the U.S. Bureau of Customs and Border Protection (CBP) and the FDA. Any entry for an FDA regulated product that is filed with CBP will also be electronically submitted to FDA for review.

A system called Import Alerts prevents potentially violative products from being distributed in the U.S. They also place the responsibility back on the importer to ensure that the products being imported comply with the FDA’s laws and regulations. Before importing into the U.S., importers should know if their products are subject to the Detention Without Physical Examination (DWPE) of products that appear to violate the FDA’s laws and regulations.

The rules that companies must follow when exporting medical devices depend on whether or not their devices have been approved or cleared by the FDA. Medical devices that are legally marketed in the U.S. may be exported to anywhere in the world without prior FDA notification or approval. Devices that have not been approved or cleared in the U.S. must follow the export provisions of the Federal Food, Drug and Cosmetic (FD&C) Act.

Depending on which section of the FD&C Act a firm is exporting under, it may need to request an FDA Certificate to Foreign Government (CFG), or it may need to submit a simple notification.

The CDRH Export Certification and Tracking System (CECATS) is a voluntary electronic system that allows manufacturers and initial importers to request export documents online as an alternative to paper submissions.

Important: Only trust and respond to emails that end in informa.com. Apart from the Informa email addresses, you can expect automated email and communications from our Online Platform service provider.

All other email domains are not associated nor represent Informa Markets or FIME. Beware of unsolicited websites and companies trying to sell or trade FIME's attendees list.

All visitors must be 18 years or older. Children and Juniors under 18 years of age are not permitted in the Florida International Medical Expo or areas around the event.

FIME will be organized in accordance with Informa’s AllSecure health and safety standard.

Our global reach in Healthcare

Whether in person or online we enable deeper learning, relationships and decisions.
Staging 12 live and online exhibitions, 110 conferences and reaching over 700,000 healthcare professionals, we are where the world of healthcare meets.

Together for a healthier world